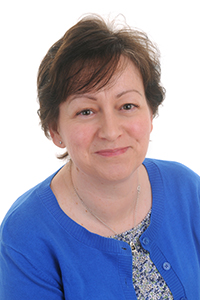 New dividend tax legislation comes into force on 6 April 2016 which will affect your income from dividends. The new system will have little impact on small investors with modest dividend income but may potentially have considerable impact on director-shareholders of SMEs, and they should be reviewing how and when they withdraw profits from their companies.

Historically the most tax efficient way for directors-shareholders to withdraw company profits has been a combination of salary and dividend (assuming availability of reserves). This allowed director-shareholders of a company to draw total cash of up to £35,060 without incurring any personal tax or NIC in 2015/16. Under the new system this level of drawings would incur a tax liability of £1,429.50 in 2016/17.

Here’s a worked example to highlight the difference the new legislation will make. In this example, a director has a basic salary of £31,000 and a dividend of £27,000. You can see, under the 2015/16 tax legislation, that the cash available to the director is £46,979 after taxes and National Insurance. 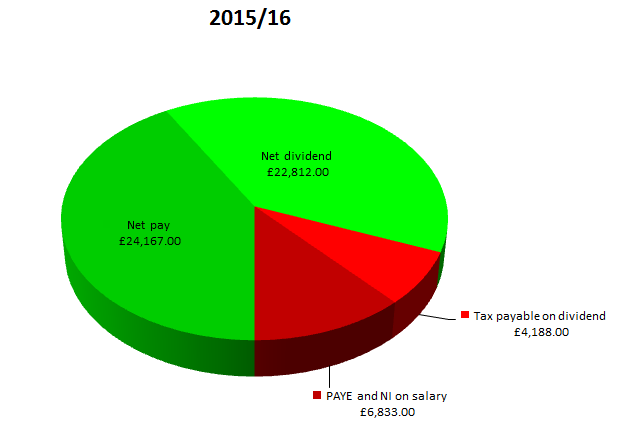 Contrast this with the new legislation starting in 2016/17 for a comparable basic salary, and you can see that despite the introduction of the new Dividend Allowance, the effective increase in income tax due on the same dividend amount increases, reducing the cash available to the director to £45,847, a decrease of £1,132. 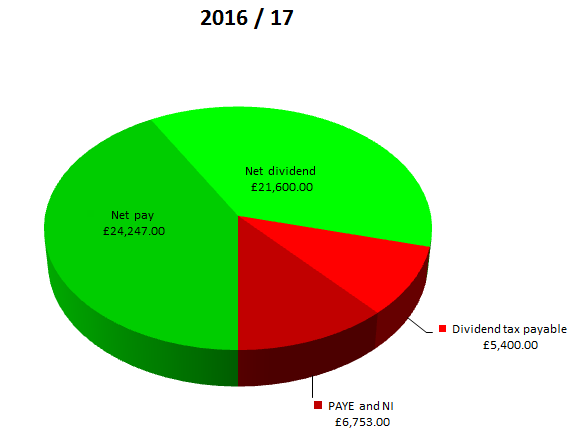 Overall, these new rates are expected to increase the effective rate of tax on dividends for most company owners although in practice, this will differ from individual to individual depending on their circumstances, and some may be better off.

For most taxpayers below state retirement age, withdrawing profits from a company through dividends will remain more tax-efficient than taking a salary or bonus in 2016/17. Owners should also consider whether they are able to withdraw funds in other ways which may be more tax-efficient, for example through pension contributions, interest or rental payments.

This is a complex area and there are other considerations which may impact on the salary versus dividend decision, including share ownership, cash flow differences, and high income child benefit charge.

Although these changes are likely to give rise to increased tax due on dividends it’s not all bad news. Corporation tax rates have fallen significantly in recent years with small companies currently paying 20%, falling to 19% from April 2017 and 18% from April 2020.

If this is an issue which affects you, come and talk to AMAS about the impact of the changes and options available to your company.